Australia will play 4 Tests during the Indian tour starting October 02, 2008.

BCCI gets tough with Lankan board

BCCI has reportedly decided to put on hold all future bilateral series with Sri Lanka because of "hostile" statements made by Sri Lanka Cricket chairman Arjuna Ranatunga.
BCCI officials refused to confirm the development while Sri Lankan sources said that talks between the boards had run into rough weather. The dispute had started over a proposed Test tour by Sri Lanka to England in April-May next year, when the IPL tournament takes place. Since top Lankan players have contracts to play in IPL, BCCI had proposed a financial package to help SLC tide over its losses if the tour was cancelled.
The Indian officials were reportedly unhappy over a "damaging" comment from Ranatunga in Dubai stating that BCCI was trying to buy Sri Lankan cricket with the bailout package proposal. BCCI sources said since the aid package hadn't been finalized or made public, Ranatunga had no business talking about it. BCCI official Niranjan Shah, however, rubbished reports of a BCCI boycott, saying, "There is no truth in such reports and we are not putting on hold future bilateral tours with Sri Lanka."
The meeting between representatives of the two boards, which took place in Bangkok, was reportedly attended by Modi and other Indian board officials, and SLC's interim committee member Siddath Wettimuny and two other SLC officials. The agreement was to be based on three conditions: Top Lankan players would be released for the IPL season, BCCI would compensate SLC and the two top club teams from Sri Lanka will be invited to next year's Champions League. The Lankan board wanted India to tour Sri Lanka again in 2009 and 2010 for some One-day matches.
The confidential documents reportedly state that, apart from putting the tours on hold, the Indian board had also decided to withdraw the $40 million bailout package offer to Sri Lankan cricket.
Modi reportedly said at the meeting that the bailout package was made with a genuine effort to assist Sri Lankan cricket who had a mutual understanding with them.

India Blue put up an emphatic performance to register a crushing eight-wicket victory over India Red to lift the NKP Salve Challenger Trophy at Cuttack on Sunday.
India Red were bundled off for 151 before the Blues crossed the target in just 25.4 overs. Ajinkya Rahane and Robin Uthappa gave a solid start to the Blues with a 93-run stand, dashing Reds' hopes of a comeback at Barabati Stadium.
Reds' decision to bat first backfired as they lost wickets at regular intervals before being bowled out in 43 overs. Ashok Dinda and Siddharth Trivedi struck early blows to leave Red reeling at 72 for 6. Captain Subramanian Badrinath (56) and Praveen Kumar (35) saved the blushes with a 66-run stand.
Ashok Dinda (2-23), Irfan Pathan (2-30) and Siddhrath Trivedi (3-23) struck for Blues to scuffle any chance of Red's fight back.
Opener Parthiv Patel was trapped leg before by Dinda in the second over. Rohit Sharma, whose century against India Green helped Red to the final, edged a drive to Virat Kohli at second slip.
Badrinath and Murali Vijay (30) played with caution as the first ten overs brought just 25. Vijay got out trying to step up the run-rate. From there in, it was a middle-order collapse before Parveen and Badrinath gave some respectability to the score.

India Green succumbed to a 19-run defeat against India Blue as they were all out for 199, with an over to spare in the Challenger Series for the NKP Salve Trophy at Barabati Stadium.
Green, thus, squandered their chances to make it to the final. India Blue will take on India Red in the final on Sunday. Cheteshwar Pujara’s valiant 65 was not enough for Green as they were chasing a target of 219 from 45 overs.
Ravichandran Ashwin picked up 3/46 in nine overs for the Blue. Green captain Mohammed Kaif scored a pain-staking seven off 32 balls.

Rohit Sharma stroked an emphatic unbeaten century to guide India Red to a five wicket win over India Green in the N.K.P. Salve Challenger Trophy.
Rohit’s strokeful 117 saw India Red cross the 261 run target with one over to spare at the Barabatti Stadium. The Mumbai batsman was well supported by Murali Vijay (45) and Abhishek Nayar (34). India Red, who lost their first match against India Blue, thus kept themselves in the hunt for a place in the final Sunday. India Green would take on India Blue Saturday to decide the finalists.

Sachin Tendulkar returns to top 20 in ICC Rankings for Test

Master Blaster Sachin Tendulkar has proved again that he still has what it takes to make an impact at the highest level.
Before the second Test against Australia he had slipped to 24th place in the ICC Player Rankings for Test batsmen, his lowest position for 15 years. But the 35-year-old showed in Mohali that he was not finished yet and after his innings of 88 not out he has broken back into the top 20 batsmen and now sits in 19th position.
It is another reason for the Mumbai man to celebrate after becoming the highest scoring Test batsman in history during that match, overtaking the record of 11,953 runs set by West Indian great Brian Lara. Tendulkar now has team-mates Rahul Dravid and VVS Laxman in his sights as both have lost ground in the latest rankings.
Other big movers include Virender Sehwag (up one place to 10th) Gautam Gambhir, who moves up eight positions to 29th place after innings of 67 and 104, Mahendra Singh Dhoni, who progresses seven places to 37th, and Sourav Ganguly, whose century in the first innings gave him a two-place boost to 23rd on the list.

Robin Uthappa scored a fluent 94 to steer defending champions India Blue to a 49-run win over India Red in the opening match of the NKP Salve Trophy Challenger Series at Barabati Stadium.
Chasing a target of 236, India Red failed to capitalise on M Vijay's defiant 89 to be dismissed for 186 in 45.3 overs. Tamilnadu opener Vijay waged a courageous fight at one end, while wickets fell one after another at the other. Vijay put on 78 runs for the fifth wicket with Manoj Tiwari (45) before being caught at long-on of the bowling of R Ashwin.
India Red's batting order crumbled after the dismissal of M Vijay who, for a brief time was on the verge of turning the game around for them. Off-spinner Ashwin emerged as the most successful bowler for India Blue, bagging three wickets for 27 runs. India Red will meet India Green in the next match tomorrow.

Paceman Zaheer Khan captured three wickets in four balls Tuesday as India completed a comprehensive 320-run victory in the second cricket test against Australia to take a 1-0 lead in the four-match series.
Australia, which resumed the morning at 141-5 chasing an unlikely 516, lasted 18.4 overs on the fifth day after being rocked by Khan, who finished with 3-71. The defeat was Australia's seventh-heaviest by runs, eclipsing the 307-run loss to South Africa in 1969-70.
The first test in Bangalore was drawn and India will head to Delhi for the third match starting Oct. 29 looking to wrap up the series and regain the Border-Gavaskar trophy. 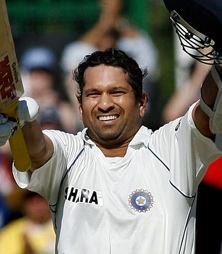 Master Blaster Sachin Tendulkar has become the world record Test runs scorer, surpassing Brian Lara's previous best mark of 11,953.
Tendulkar, 35, needed 15 runs to overtake West Indies legend Lara in the standings on the first day of the second Test against Australia in Mohali. And despite being forced to go to tea on 13 not out, the 'Little Master' came out after the interval to hit Australian debutant Peter Siddle's first ball of the session for three runs to spark wild celebrations in the ground.
The crowd gave Tendulkar a standing ovation to celebrate his achievement, while a pre-prepared fireworks display was also set off outside. The entire Australian team also stood to applaud the batsman, who received warm handshakes from each member of the opposition lineup.
Tendulkar already held the record for Test centuries with 39 in 152 Test matches for India and he is regarded as a living legend in many parts of his homeland - particularly in his native city, Mumbai (formerly Bombay). The batsman's achievement - and brilliance on the big occasion - was almost underlined with a 40th Test century, but it was not to be as he was dismissed on 88 after a catch at slip by Matthew Hayden off the bowling of Sidde.
The innings takes Tendulkar's career total to 12,041 – making him the first batsman ever to surpass 12,000 Test runs.

The Indian cricket board's discussions with the unofficial Indian Cricket League have broken down, thwarting the privately promoted league's hopes of securing recognition.
Officials from the Board of Control for Cricket in India and the ICL met "to see if there was any common ground," Indian cricket board secretary N. Srinivasan said in a statement Thursday night. "The talks failed and there are no plans for any further meeting."
The meeting on Thursday was the first time the non-sanctioned ICL held discussions with the Indian cricket board, which has imposed life bans on all Indian players participating in the Twenty20 competition. The BCCI's firm opposition to the ICL had also forced several other national cricket boards to take punitive action against their players who featured in the ICL, which started last year.
The ICL has approached the International Cricket Council, asking for the event to be recognized by the game's governing body. The ICL event was on the agenda of the ICC board meeting in Dubai earlier this month, where the Indian board said it would meet ICL officials and report back.

England will play 2 Tests followed by 7 ODI's during the Indian tour starting November 09, 2008.

India will play 5 ODIs and only Twenty20, followed by 3 test matches during the Pakistan tour starting January 04 2009.