The spectacular arrival of Virender Sehwag was bound to inspire others to bat with the same mindset. But the odds of a clone emerging from the backwaters of Jharkhand, whose state side has consistently scraped the bottom, was highly remote. That was until Mahendra Singh Dhoni also known as "Mahi" arrived. He can be swashbuckling as a batsman and secure as a wicketkeeper. His neck-length hair adds to his dash. Though Dhoni made his first-class debut in the 1999-2000 season, it was only in 2004 that he became a serious contender for national selection with some stirring performances when the occasion demanded - a rapid hundred which helped East Zone clinch the Deodhar Trophy and an audacious 60 in the Duleep Trophy final. But it was with his two centuries against Pakistan A, in the triangular tournament in Kenya, that he established himself as a clinical destroyer of bowling attacks. In just his fifth one-dayer, against Pakistan at Vishakapatnam, he cracked a dazzling 148 - putting even Sehwag in the shade - and followed that up with a colossal 183 not out at Jaipur against Sri Lanka in November, when he broke Adam Gilchrist's record for the highest score by a wicketkeeper in ODIs.

MS Dhoni gets temple in Ranchi

In a country of gods and god men, a new god has emerged. Indian cricket captain MS Dhoni’s fans have elevated him as a god. In Ranchi, they are building India's first temple where the Indian cricket legend Dhoni would be worshipped by his fans.. 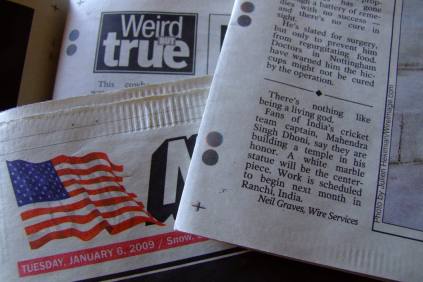 Photo: News as appeared in New York Post, USA.
Once the construction is done, a white marble statue of the sports star will be placed in the middle of the temple. The temple’s walls will also have carvings of ’Dhoni in action’.
According to Dhoni fan club’s president Jitendra Singh, "Dhoni is god to cricket and we have decided to construct a temple. He will be worshipped like other gods are worshipped in temples." Dhoni was quite modest about the whole idea but expressed his doubts of being worshipped by his fan-cum-disciples. Describing the fans’ decision as extreme passion for cricket and their star, Indian cricket historian and Oxford scholar Boria Mazumdar said that he would not call it madness because it would simply dismiss emotions of Dhoni’s fans.
It may be recalled that Dhoni guided India to clinch Twenty20 inaugural World Cup against arch-rival Pakistan and also helped his country win a series of important matches at home and away against Australia and England.