Virender Sehwag is a primal talent whose rough edges make him all the more appealing. He is an opening batsman who by the time had scored his first centuries in one-day cricket (off 70 balls, against New Zealand) and Test cricket (on debut, against South Africa, from 68 for 4), he was already eliciting comparisons with his idol Sachin Tendulkar. It is half true. Like Tendulkar, he is short and square with curly hair, plays the straight drive, backfoot punch and whip off the hips identically, but leaves Tendulkar in the shade when it comes to audacity. Asked to open the innings in Tests on the tour of England in 2002, Sehwag proved an instant hit, cracking an 80 and a 100 in the first two matches. Regularly thereafter, he kept conjuring pivotal innings at the top of the order, none as significant as India's first 300 (which he bought up, characteristically, with a six), at Multan against Pakistan in early 2004. Sehwag is an effective, loopy off-spinner, and is a reliable catcher in the slips. He also once almost split the cricket world: when he was banned for a match by the ICC referee Mike Denness on grounds of excessive appealing, the Indian board wasn't prepared to listen, and even played an unofficial Test with South Africa to prove a point. When a compromise was finally reached, Sehwag was back to his merry ways. 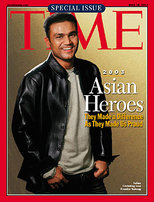 The only batsman to reach a triple century with a six in test cricket
2nd fastest test double century when he reached the landmark against Pakistan off just 182 balls
Broke Don Bradman's record of most consecutive 150s by scoring 7 of them in his last 7 centuries. 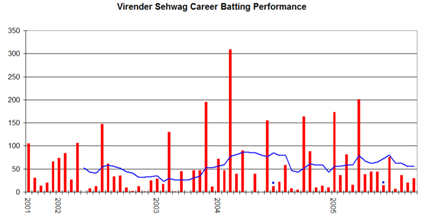