When he became the first batsman to score 50 hundreds in international cricket, Sachin Tendulkar established himself as the greatest of all Indian cricketers. Sachin Tendulkar Website. Recognised by Sir Donald Bradman as his modern incarnation, Tendulkar, the batsman, has a skill - a genius - which only a handful have possessed. It was not a skill that he was simply born with, but one which was developed by his intelligence and an infinite capacity for taking pains. If there is a secret, it is that Tendulkar has the keenest of cricket minds. At times in a Test series he looks mortal. But he learns every lesson, picks up every cue, dominates the opposing attack sooner or later, and nearly always makes a hundred. His bravery was proved after he was hit on the head on his Test debut in Pakistan, when he was only 16; and his commitment to the Indian cause has never been in doubt. If captaincy - or rather the off-field management of men less skilled than himself - was beyond him at his first attempt, his reading of the game, and his manifold varieties of bowling, have shown the same acute intelligence. His cricket has been played in the right way too, always attacking, and because he knew that was the right way rather than because he was a child of the one-day age, as he himself modestly said. The awe of opponents was as great as that of crowds. But the finest compliment must be that bookmakers would not fix the odds - or a game - until Tendulkar was out. 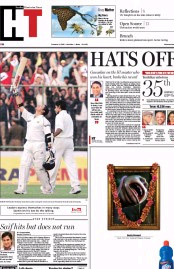 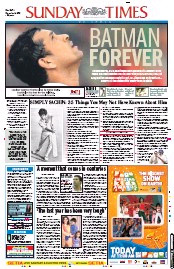 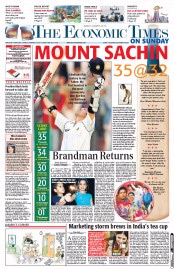