Sachin ruled out of second Test against South Africa

Sachin Tendulkar has been ruled out of the second cricket Test against South Africa in Ahmedabad starting April 3 and Mohammad Kaif has been named as his replacement.
"Sachin Tendulkar re-aggravated his right groin injury when he was fielding on the fourth day of the first Test and his playing the second match is doubtful," a Board of Control for Cricket in India statement said on Sunday. The selection committee had decided to replace Tendulkar with Mohammad Kaif for the second Test, the statement added.
Skipper Anil Kumble also sustained right groin injury while bowling on the last day of the match but physiotherapist Paul Close is confident that he will be available to play the Ahmedabad Test. A final decision in this regard will be taken a day before the match.
Kaif, who got the nod for his excellent performance in the domestic circuit this season, is returning to the side after a gap of almost two years. His last Test was against West Indies at Kingston in June 2006.

The first Test between India and South Africa ended in a tame draw at Chennai on Sunday.
It was a match that the bowlers would like to erase from their memory as quickly as possible. South Africa ended their second innings at 331/5 with Neil McKenzie remaining unbeaten on 155. For India, Harbhajan Singh took eight wickets in the match off an astonishing 78.5 overs.
Earlier, Neil McKenzie continued to frustrate the Indian bowlers as he moved past 150. Scored in 313 balls, McKenzie’s 150 was starred with 13 boundaries and a massive six.
The last day of the Chennai Test started with South Africa resuming their second innings from an overnight score of 131 for 1. With Neil McKenzie batting on 59 and Hashim Amla looking compact as ever on 35, a result in the match looked like a distant possibility unless either of the teams produced a miracle. The pitch at the MA Chidambaram Stadium did not have any significant help for the bowlers on the first four days and was not expected to behave any different on day five.

Indian selectors on Monday announced a 14-man squad for the first two cricket tests against South Africa, resting injured pace sensation Ishant Sharma and bringing back left-arm spinner Murali Karthik.
India retained opener Wasim Jaffer and wicketkeeper-batsman Dinesh Kartik for the series that begins next week, Niranjan Shah, secretary of the Board of Control for Cricket in India, told reporters in the southern Indian city of Bangalore.
Fast bowler Sharma suffered finger and toe injuries during a recent one-day tri-series with Australia and Sri Lanka. India won the series. Karthik returns to the Indian side, led by leg-spinner Anil Kumble, after his good showing in the home series against Pakistan last year.
Off-spinner Harbhajan Singh made it to the Indian side after clearing medical tests for a hamstring injury, while batsman Yuvraj Singh was picked after recovering from a knee injury. The first test will be played in Chennai from March 26., the second in Ahmadabad from April 3 and the third in Kanpur from April 11.
India team: Anil Kumble (Captain), Mahendra Singh Dhoni, Sachin Tendulkar, Rahul Dravid, V. V. S. Laxman, Sourav Ganguly, Virender Sehwag, Yuvraj Singh, Wasim Jaffer, Dinesh Kartik, Irfan Pathan, Shantakumaran Sreesanth, Rudra Pratap Singh and Murali Karthik.

India's young but triumphant cricket team arrived here Thursday to a hero's welcome after winning an international triangular one-day series by beating Australia on their own turf.
A resurgent India beat Ricky Ponting's world champions by nine runs in Brisbane on Tuesday to clinch the series final 2-0. Sri Lanka were the other team in the fray. It was India's third success at international level since September 2007 when they won the Twenty20 World Championships in South Africa. They also clinched the Under-19 World Cup in Malaysia last Sunday.
Thousands of fans waited outside the airport to cheer their favourite cricketers, who flew into New Delhi from Australia after a short stop in Mumbai to change planes. Skipper Mahendra Singh Dhoni thanked the fans at a packed Ferozeshah Kotla ground here for supporting the team on what was at times a testing tour Down Under.
The tour of Australia, marred by controversy and bad blood, looked in danger of being called off after a Test in Sydney against the hosts when Harbhajan Singh was suspended for allegedly racially abusing Andrew Symonds. The International Cricket Council later overturned the suspension following an appeal hearing. As well as instant fame and enduring popularity in cricket-mad India, the winning squad also received a cash award of 100 million rupees (2.5 million dollars). 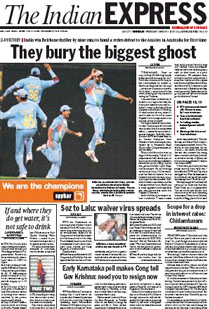 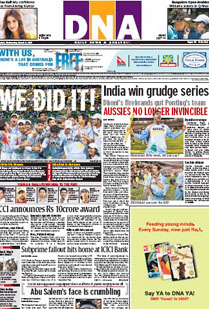 India wrapped up the triangular one-day international cricket competition when they beat Australia by nine runs to take an unbeatable 2-0 lead in the best-of-three finals series at Brisbane Tuesday.
The Indians made 258-9 in their 50 overs then restricted the home side to 249 to claim a thrilling win and take the final ever triangular series to be played in Australia. Veteran Sachin Tendulkar led the Indian batting with a fine 91 before newcomer Praveen Kumar tore through the Australian top order, claiming Adam Gilchrist, Ricky Ponting and Michael Clarke with just 32 runs on the board.
Kumar came back at the death to bowl Brett Lee and finish the match with 4-46 from 10 overs to signal his arrival on the international scene. Australian allrounder James Hopes led a rearguard action, scoring a career-high 63, but he kept losing batting partners and was last man out when caught at mid-off trying to blast 13 runs off the final over.
After Dhoni won the toss and chose to bat, India were 205-3 at one stage and heading for a score of more than 300. But when an injury-hampered Tendulkar was dismissed for 91, the scoring rate slowed and Australia's bowlers began to gain control.
Tendulkar was well supported by Yuvraj Singh (38), M.S. Dhoni (36) and Robin Uthappa (30), but the Indians were at least 50 runs short of where they should have been.