Rahul Dravid has told India's national cricket board that he wants to step down as team captain, a senior board official said Friday.
"Rahul said he would like to concentrate on his batting and the opportunity should be given to a new person to lead the side,'' board President Sharad Pawar told reporters in New Delhi. Dravid, 34, led India in 20 test matches and 62 limited-overs internationals after replacing Sourav Ganguly as skipper two years ago. India won eight test matches under Dravid's captaincy, including a 1-0 triumph in a recent three-test series against England - the team's first test series win in England since 1986.
Dravid's captaincy also broke the Indian team's lean run, with last year's test series victory in the West Indies its first test series triumph outside the subcontinent in two decades. Dravid's resignation comes after India's 4-3 defeat by England in the limited-overs series which followed the tests.
Dravid and two former Indian captains - Ganguly and Sachin Tendulkar - opted out of the ongoing World Twenty-20 championship.
In Dravid's absence, the selectors handed the Indian captaincy for the World Twenty-20 championship to Mahendra Dhoni, who is being tipped to be a future captain. The selectors are scheduled to meet Sept. 18 to pick the Indian squad for the seven-match limited-overs series against world champion Australia.

Paul Collingwoods side won the seven-game series 4-3, completing the job with a comfortable seven wicket win with more than 14 overs to spare in the last ODI at Lords on September 8. It was England's first home one-day series win for three years. India, who had come back from 3-1 down to take the series into a decider, couldn't establish themselves after winning the toss.

Fifties from Kevin Pietersen and Paul Collingwood guided England to a comfortable series-clinching win over India in the seventh and final one-day international at Lords on Saturday.
Chasing a modest 188 for victory, England romped hom in the 37th over after India had been bowled out for 187 (47.3 overs). Mahendra Singh Dhoni (50) and Sachin Tendulkar (30) top-scored for India. 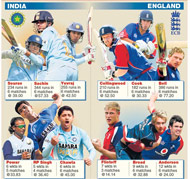 With the series tantalisingly poised at 3-3, a buoyant India will seek to record an overseas One-Day International series triumph as they take on an equally determined England in the decider at Lords on Saturday. Rahul Dravid and his men have shown tremendous resilience to bounce back from a 1-3 deficit and the hallowed turf of the Lords provides the perfect setting for an engrossing battle between the two teams.

Final appearance by Sachin & Ganguly in England?
Each of the three victories by India has been marked by a century partnership between Tendulkar, 34 and Ganguly, 35, who have revived old memories with scintillating opening stands. The terrific duo put on 113 in 19.3 overs at Bristol, 116 in 19.4 overs at Leeds, and 150 in 22.2 overs at The Oval. This is likely their last tour of England.
Sachin's 344 runs from six innings in this series have come at an average of 57.33 and a stunning strike-rate of 88.20 while Ganguly scored 234 runs so far at an average of 39 with a strike rate of 73.81

India pulled off a stunning two wicket win to overhaul England's target of 317 to win the sixth ODI at The Oval and level the series 3-3.
Sachin Tendulkar scored a brilliant 94 before getting out and suffering from cramps while Robin Uthappa kept his cool under pressure to hammer an unbeaten 47 to guide India home with two balls to spare.

Skipper Rahul Dravid said improving on its consistency would be the major challenge for India as they aim to turn the tables on England in the remaining two one-day internationals and win the seven-match series.

England who were chasing a revised 311 from 45 overs after rain interrupted play more than once were finally halted by another downpour giving India a 38 runs (D/L method) victory. England needed 69 runs with 2 wkts in hand and 36 balls remaining at that stage. Mahendra Dhoni equalled the world record for maximum dismissals with six in the innings - 5 catches and 1 stumping. Earlier, a strong batting performance led by Sachin Tendulkar's 59 ball 71 helped India post a commanding 324 for 6 against England. India's top four hit quickfire fifties after being sent in to bat first. Sachin shared a 116-run opening stand with Sourav Ganguly (59 off 79), who was playing his 300th ODI. Yuvraj Singh followed up with a 57 ball 72 and Gautam Gambhir came up with a valuable 51 at number three.
Rahul Dravid and Dhoni shared a 4.1 over 45 run partnership for the fifth wicket towards the end. Both hit 24 from 17 balls each. England: Cook, Prior, Bell, Pietersen, Collingwood, Shah, Bopara, Broad, Anderson, Panesar, Lewis
India: Ganguly, Tendulkar, Gambhir, Dravid, Yuvraj, Karthik, Dhoni, Agarkar, Powar, Chawla, Zaheer