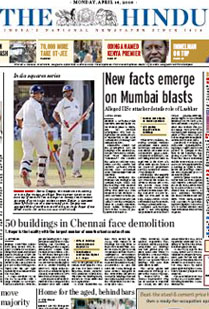 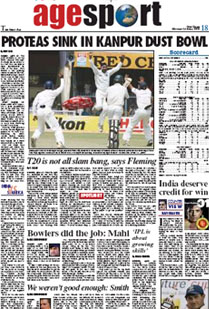 India win by 8 wickets in the third and final Test against South Africa at the Green Park stadium in Kanpur.
With this win, Team India have levelled the Future Cup series and retained their position in the ICC Test rankings. Harbhajan Singh was declared Man of the Series for picking an amazing haul of 19 wickets in the series.
Playing their second innings, South Africa were cheaply bowled out for 121-all out on Day 3 of the third Test. Spinner Harbhajan took a four wicket haul, while Virender Sehwag struck three vital wickets leaving Indian batsmen to chase a measly 62 run target to win the match and level the series.
Opening India's second innings play on a bouncy wicket on Day 3, Sehwag scored a quickfire 22 in 12 balls, with two huge sixes off Paul Harris. Sourav Ganguly on 13 and Dravid on 18 runs remained unbeaten at the end of play.
Earlier, replying to the Proteas' first innings total of 265-all out, India put up an aggregate of 325 runs taking a lead of 60 runs. Ganguly top scored playing a handsome knock of 87 runs, with VVS Laxman giving him company in the top scorers with a 33rd Test fifty. The Bengal Tiger was rightly adjudged Man of the Match.

After receiving a humiliating defeat from the South African team, India on Sunday made some changes in its squad for the Kanpur Test.
Pacers Ishant Sharma and Munaf Patel have been inducted, while RP Singh has been dropped from the 16-member Indian squad. Selectors also recalled Mumbai’s off-spinner Ramesh Powar in the squad. The South African went 1-0 up in the three-test series on Saturday after winning the second game in Ahmedabad by an innings and 90 runs.
Powar, who has played two tests, has been named partly as cover for skipper and leg-spinner Anil Kumble, who suffered a groin strain in the drawn first test and did not seem fully fit in the second test. Shah said both Sharma and Kumble would be subject to fitness tests on April 10, a day before the final test starts in Kanpur.
India team: Wasim Jaffer, Virender Sehwag, Rahul Dravid, Saurav Ganguly, Vangipurappu Laxman, Yuvraj Singh, Mohammad Kaif, Mahendra Singh Dhoni, Irfan Pathan, Anil Kumble (Captain), Harbhajan Singh, Piyush Chawla, Ramesh Powar, Ishant Sharma, Shanthakumaran Sreesanth, Munaf Patel.

South Africa defeated India by an innings and 90 runs in the second test Saturday. South Africa took a 1-0 lead in the three-match series after the opening test ended in a draw.
This is South Africa's 4th win on Indian soil. Smith and his men today (April 5) morning declared on their overnight total of 494 for 7 - having taken a massive lead of 418 runs at stumps on day 2.
It was always going to be a herculean task for the Indian batsmen and rather disappointingly the Indian top order failed to show the application required.
Ntini, Morkel and Kallis combined to reduce India to 70 for 3. Laxman was next to fall after scoring 35 runs. Ganguly and Dhoni did offer some resistance adding 110 runs for the 5th wicket, but all hopes of a miracle began to vanish after Ganguly was sent back for 87 runs by Dale Steyn.
Dhoni too chipped in with a fighting fifty but the massive South African first innings lead of 418 runs proved too much for the Indians as they were bowled out. AB De Villier was declared the Man of the Match for his double century.

South Africa are confident of burying India's spin threat yet again with a determined batting performance in the second Test starting at Ahmedabad on Thursday.
The visitors kept the spin duo of Anil Kumble and Harbhajan Singh at bay in the drawn opening Test in Chennai as they posted 540 in the first innings and 331-5 in the second, gaining a psychological boost in the process. Visiting teams often come a cropper against spin on low, slow turning tracks in India, but South Africa have shown they have the batsmen to deliver in these conditions, a point already conceded by home captain Kumble.
Off-spinner Harbhajan Singh and leg-spinner Kumble have been a formidable pair at home for a long time, but failed to keep pressure on the South African batsmen in hot and humid conditions in Chennai despite sharing 11 wickets. South Africa have been doing remarkably well in the sub-continent in recent months, having won Test series in Pakistan and Bangladesh.
India are already without batting superstar Sachin Tendulkar, ruled out of the match after aggravating a groin injury in the previous game. He was replaced with Mohammad Kaif, returning to the side after more than a year. That India's batting flourished without Tendulkar's contribution (0) at Chennai was mainly due to Virender Sehwag, who hit the fastest triple-century in Tests, and Rahul Dravid, who scored a hundred to join the 10,000-run club.
India managed to gain lead after posting 627 following heroics from Sehwag and Dravid, but their remaining batsmen were found wanting against an inspired South African pace attack, led by Makhaya Nitini and Dale Styen.
India Team (from): Anil Kumble (Captain), Wasim Jaffer, Virender Sehwag, Rahul Dravid, Mohammad Kaif, Sourav Ganguly, Venkatsai Laxman, Mahendra Singh Dhoni, Harbhajan Singh, Shanthakumaran Sreesanth, Rudra Pratap Singh, Yuvraj Singh, Piyush Chawla, Irfan Pathan, Ishant Sharma.
South Africa Team (from): Graeme Smith (Captain), Neil McKenzie, Jacques Kallis, Hashim Amla, A.B. de Villiers, Ashwell Prince, Mark Boucher, Paul Harris, Dale Steyn, Morne Morkel, Makhaya Ntini, Jean-Paul Duminy, Monde Zondeki, Robin Peterson.

A four-match Test series, a triangular One-day tournament and a Twenty20 figure is on the schedule of the Indian cricket team's Australia tour