India fell 42 runs short of an easy looking target of 282 after a sedated, but solid start. Rahul Dravid made 56 and Sourav Ganguly 72, while Yuvraj Singh chipped in with a 45. England batted well, and followed it with a spirited bowling and fielding effort.
Chris Tremlett took the key wickets of Dravid and Ganguly , while James Anderson removed Sachin Tendulkar and Mahendra Dhoni. For England, Man of the Match Ian Bell took two superb catches off Paul Collingwood's bowling and ran out Yuvraj Singh. He also hit his third fifty (79) in as many games as England totalled 281-8 after Dravid won the toss and chose to field first.

Ireland paceman Boyd Rankin and wicket-keeper Niall OBrien have been offered contracts to play in the controversial Indian Cricket League (ICL).
I hope to be in a position to sign it next week, said Derbyshires Rankin.

Allrounder Andrew Flintoff is in doubt for England's third one-day match against India on Monday with a knee injury. The ECB said in a statement Saturday that Flintoff had a scan which showed mild inflammation and was treated with a cortisone injection.
Flintoff hurt his knee during Friday's one-day international against India at Bristol where he finished with bowling figures of 5-56. He had only returned to England for the first match at Southampton on Tuesday after spending four months sidelined with an ankle injury.India vice-captain Mahendra Dhoni said the England team will be slightly on the back foot if Flintoff is not playing, adding He has lifted them a lot, he is the kind of player who always has an impact on the game. In one-day cricket he is the perfect all-rounder.
India are likely to make one change on Monday with left-arm seamer Zaheer Khan hoping to return after a bout of flu in place of Ajit Agarkar or Munaf Patel.

India responded to their heavy defeat in the opening one-day international against England as they sealed a nine-run victory in a high scoring second meeting at Bristol.
India piled up 329 for seven, their record score at this level against England, with Sachin Tendulkar making 99 and man-of-the-match Dravid, who won the toss, a blistering 92 not out.
England fell short and finished on 320 for eight with Chawla the pick of the bowlers capturing three for 60, including the top-order wickets of Kevin Pietersen, captain Paul Collingwood and Ian Bell. India team: Ganguly, Tendulkar, Dravid, Yuvraj, Karthik, Dhoni, Powar, Chawla, Agarkar, RP Singh, Patel
England team: Cook, Prior, Bell, Pietersen, Collingwood, Flintoff, Bopara, Mascarenhas, Tremlett, Broad, Anderson

The tussle between the BCCI and the Indian Cricket League (ICL) on Friday reached the Delhi High Court with the breakaway group seeking to restrain the Board from "intimidating" its players and interfering in its affairs.

The Board of Control for Cricket in India is planning to organise a high-profile Twenty20 league of its own to counter the challenge posed by the 'unofficial' Indian Cricket League (ICL).
The plan is still at a formative stage and it is learnt that the legendary Sunil Gavaskar will be asked to head the organising committee of the event, to be called "Professional Cricket League".

Despite its ongoing tussle with the Indian Cricket League (ICL), BCCI will not stop payment of past dues to the players who have joined the ICL and all such pending amounts till the 2006-07 season will be cleared.

Rattled by the Indian Cricket League (ICL)'s massive recruitment drive, the BCCI on Tuesday retaliated by sacking Kapil Dev as Chairman of National Cricket Academy for aligning with the multi-million dollar breakaway league and announced hefty pay hikes for domestic cricketers to prevent a fresh exodus.

Organisers of the Indian Cricket League (ICL) are expected to lay the cards on the table in Mumbai on Monday by revealing the names of the players, who have signed up for the rebel cash-rich event.

Inzamam has signed up for ICL

Former captain Inzamam-ul-Haq has become the first Pakistani player to sign up to play in the rebel Indian Cricket League (ICL).

The warm-up cricket match between India and England Lions was abandoned due to heavy rain today.
Chasing a victory target of 297, India were 32 without loss in 6.5 overs with Sourav Ganguly batting on 18 and Robin Uthappa on 12 when rain stopped play and players went off the field. Play was later officially called off.

IND v SCO ODI, Glasgow: India hammer Scotland in the first ever ODI between the two

India completed an effortless transition from Test to one-day international mode as they cruised to a comfortable seven-wicket win against Scotland at Titwood, Glasgow.
Chasing a revised Duckworth-Lewis target of 209 in 46 overs, the issue was virtually settled when openers Robin Uthappa and Gautam Gambhir compiled a century stand in 20 overs. Uthappa, who scored 97 against Scotland at the Youth World Cup three years ago, punished them again on his way to a fluent 55. Man-of-the-match Gambhir finished unbeaten on 85 from 115 balls with eight boundaries and a six. The India skipper starred as overseas professional for the Saltires in 2003 and his cameo appearance was appreciated by the enthusiastic Glasgow crowd before his second boundary carried the tourists to victory with 37 balls to spare.
India fielded just three of the side which completed their Test series win against England at the Oval on Monday. Reported Earlier :After the dream Test series victory against Michael Vaughans England, a buoyant Team India would like to utilise its maiden one-dayer against Scotland on Thursday to get into the ODI mode before the seven-match ODI series against England starting next week. India team (from): Rahul Dravid (Captain), Sachin Tendulkar, Sourav Ganguly, Yuvraj Singh, Gautam Gambhir, Robin Uthappa, Rohit Sharma, Dinesh Kaarthick, Mahendra Singh Dhoni, Ramesh Powar, Piyush Chawla, Ajit Agarkar, Zaheer Khan [Images], Rudra Pratap Singh, Munaf Patel
Scotland team (from): Ryan Watson (Captain), John Blain, Gordon Drummond, Gavin Hamilton, Majid Haq, Paul Hoffmann, Neil McCallum, Navdeep Poonia, Dewald Nel, Colin Smith, Fraser Watts, Craig Wright. 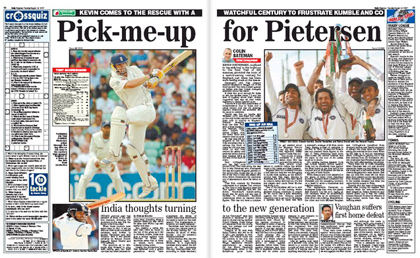 In Picture: Newspaper reports about Indian victory. India deserved their 1-0 series win against England after the third Test ended in a draw at The Oval, captains Michael Vaughan and Rahul Dravid said. Kevin Pietersen cracked 101 for his 10th Test hundred that ensured England saw the fifth day out safely on 369 for six after being set a world record victory target of 500.

India were jubilant after stumps were drawn even though they had failed to win the match as they had managed their first Test series win in England for 21 years, emulating Kapil Dev's team in 1986.
It also ended Englands unbeaten six-year run at home.

England were 56 for no loss in their second innings at stumps on day 4 of the third and the final Test match against India. All the 10 wickets of England are intact as Indian bowlers failed to make hay on the dead pitch at the Oval. Andrew Strauss and Alastair Cook were on the crease with 27 and 23 runs respectively.
India declared their second innings on the score of 189 runs for 6 on day 4. India attained a lead of 499 runs and gave110 overs to England to complete the target of 500 runs.
Reported Earlier: England hit back with three early second-innings wickets as India stuttered to 35-3 at lunch on the fourth day of the third and final cricket Test.
In reply to India's first-innings 664, England lost the wicket of Monty Panesar this morning to be all out for 345 at the Oval in south London. The visitors are 354 ahead, with lunch being taken early because of rain.

England ended day three of the Oval Test facing the prospects of a follow on as they finished on 326 for 9, needing a further 139 runs to make India bat again.
Opener Alastair Cook, who was dropped twice enroute his first fifty of the series made 61 before he fell to Anil Kumble. The Indian ace then snapped skipper Michael Vaughan in the last over before lunch to set the cat among the pigeons in the England camp.

In reply to India's mammoth total of 664, England were 24 for 1, a trail of 640, at close on Day 2 of the series decider final Test at The Oval.
India's ace leg-spinner Anil Kumble scored his maiden Test hundred in the post-tea session on the second day of The Oval Test against England on Friday, as the tourists were bowled out for 664 in 170 overs. Kumble reached his hundred when the team total was 636 for 9 in the 165th over and remained unbeaten on 110.

India ended the opening day of the final Test at The Oval on a commanding 316 for 4 as England bowlers were made to toil on a placid wicket.
At stumps, Sachin Tendulkar was unbeaten on a patient 48 and giving him company was VVS Laxman on 20.
Earlier, England captured two quick wickets after India had got off to a fluent start and were well placed at 211-3 by tea. Opener Wasim Jaffer fell before lunch for a breezy 35 off 47 balls. Dinesh Karthik was unfortunate to have got out on 91 as he looked sure to reach his second Test century, but the Tamil Nadu batsman flourished in the company of Rahul Dravid as the duo added 127 in 33 overs.
However, James Anderson produced a magical delivery that swung late to york Dravid, who made his 48th Test fifty and was out for 55. Karthik fell nine short of a second Test ton when he edged behind off Ryan Sidebottom. Later in the day, Tendulkar and Sourav Ganguly stitched a partnership of 77 before the latter was trapped leg before by Paul Collingwood for 37.